Fearmongering is a marketing tactic that is pretty FUD-up. It started as a disinformation strategy in the 1970s, and there have been some pretty famous cases of FUD, including IBM and Microsoft’s marketing techniques from that era (and even from today). FUD = fear, uncertainty, and doubt, and we’re pretty certain that it’s freaking terrible.

Let’s talk about the history a bit and figure out some other ways to talk to people…like people. Some fear is warranted. If you’re talking about health, for example, and you expose all the issues with not choosing the healthy path, then you’re being persuasive.

But if you’re writing copy that talks about the catastrophic consequence of not using a specific eyeliner, for example, well…that’s just rude. And it’s wrong. There are plenty of examples that prove substantiated fear-based copy is okay and even helpful. And that’s not what we’re talking about here.

This, for example, is a moving narrative ad that uses fear properly…because climate change is real and because polar bears are dying for real.

We’re talking about this Listerine ad’s sales pitch, which is based on irrelevant and inappropriate fear. 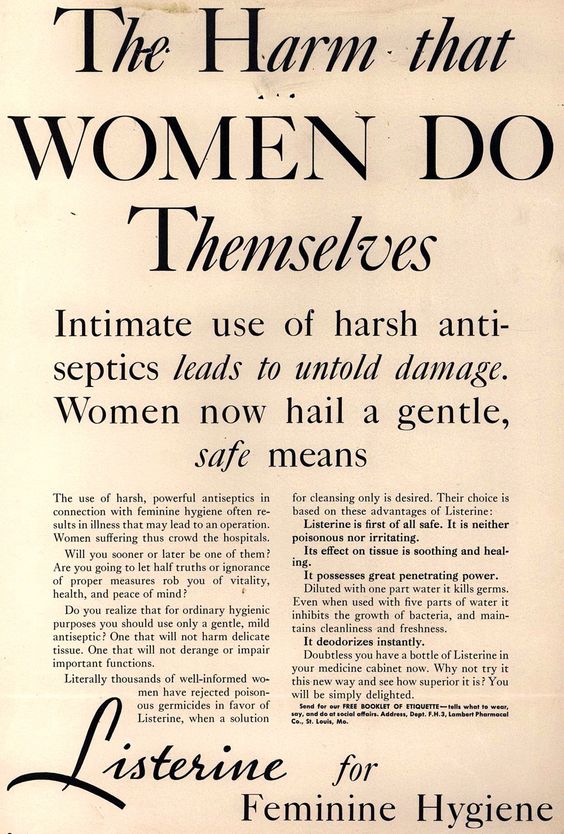 Did Listerine just claim that not using their products can lead to overcrowded hospitals? And are they talking about “untold damage”? Because now we’re really scared. As you can imagine, this ad may have been effective, but it’s not really ethical. And we think that there’s a better way. You can still elicit a response, but you don’t have to be creepy about it. Instead, you can engage with people’s “fight response” in an ethical way:

Fear is the result of a perceived threat, which we respond to in one of two ways: fight or flight. The key to using fear as an advertising strategy is to avoid intense threats that activate the flight response and instead focus on mild threats that activate the fight response. One example of how to do this with a simple headline comes from a Delta Airlines poster promoting on-board WiFi that reads, “Direct flights have never had this many connections.” An immediate conflict exists between the concept of “direct flight” and “connections.” This conflict triggers a mild threat response that causes the brain to slip into problem-solving mode. The need for certainty and clarity pieces together the puzzle and forms an emotional connection once the conflict is resolved. The audience’s brain does the work, and both the audience and the brand benefit.

Even though corporations have been using fear-based ads for a while, we think there’s a better way to market through ethical means. According to a study published by The International Journal of Research in Marketing, positive advertisements stay with people longer. According to Matt Palmquist, a writer for Strategy-Business, this study found something pretty cool:

Strikingly, the benefit of taking a positive approach in advertising persisted across industries and endured regardless of the product’s value to a consumer. Whether the commercial advertised a durable item (such as a refrigerator), a short-term product (such as soap or soda), a service (such as a cell-phone subscription or haircut), or merchandise (such as furniture or clothing), the findings were consistent. They showed that “compared to ads that elicit less pleasant feelings, ads that elicit more pleasant feelings may trigger more positive beliefs and thoughts about the brand, which, when integrated into summary evaluations, would result in more favorable brand attitudes,” the authors write.

Start with the Truth

But Matt isn’t the only one who noticed that positive marketing is better. In Humanistic Marketing, the authors talk about marketing in order to “improve the human condition” and we think that’s pretty smart. But where do we start? We think you should start with the truth. Telling the truth seems like a pretty basic ethical standard. The world’s best example of truth in advertising may be a tiny “Help Wanted” ad that appeared in the London papers in 1900: “Men wanted for hazardous journey. Small wages, bitter cold, long months of complete darkness, constant danger, safe return doubtful. Honor and recognition in case of success. Ernest Shackleton.”

Some marketers will shoot for the smaller group instead of the masses. Take this Army ad, for example. Advertisers used targeted marketing to reach people who were already prepared for the Army. This Army ad is a great example of innovation because they are promoting a career and a life that is exceedingly difficult and dangerous. How? They reinvent themselves, they promote the idea that the Army isn’t for everyone, but it might be for you. They target the elite.

Marketing for better isn’t about exaggerating issues to seem better than you are. It’s not about scaring customers into purchasing your products. It’s about creating a relevant story that will help you reach the customers who want to see you. In an ethical way.