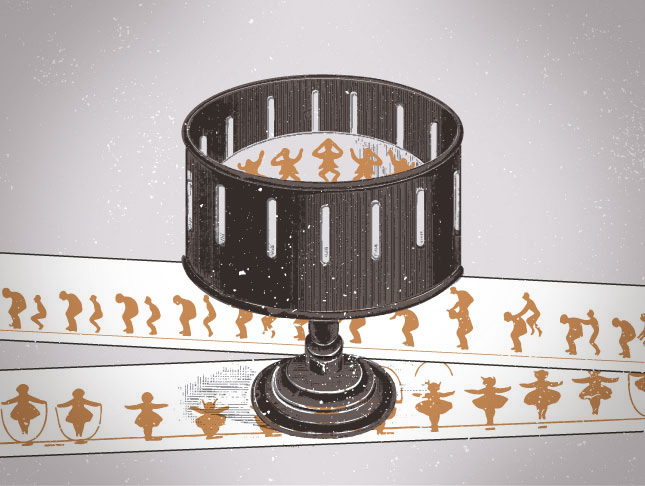 You might be aware that we’ve been expanding our animation abilities here at Entermotion, and we wanted to trace the history of animation a bit since we’re pretty much obsessed.

Movement and Film: How We Got Here

As wild and freakish as it might seem, animation didn’t spring up in the 20th century. In fact, in the 1970s, a bowl was found in Iran. And not just any bowl, but a 5,200-year-old bowl that featured sequential images with minimal changes. It wasn’t simply a decoration, it was an early animation. When spun around, the images would seem to move, or be animated.

Even before modern animation techniques were possible, humans were fascinated with making the inanimate animate.

We have Frankenstein’s monster; we have early creation stories where men were born of dust; there’s a need to find and think about movement, and, even before film, early photographic techniques were used in order to give the idea of movement.

In the 17th century, around the same time when advances in seeing were heightened (Kipler discovered that planets move elliptically instead of circularly; Galileo discovered Jupiter’s moons; Paradise Lost was published– even though Milton himself was blind), a concave mirror instead of a black structure changed the way we were able to see movement from static images.

The magic lantern could be hand operated to project moving images (two slides would be placed on top of each other with nearly identical images save for a tiny difference. An operator would move one of the slides so that a “moving” image would appear on the screen.)

It’s a long way to the depth perception we were able to see in Snow White, but it’s magical nonetheless.

The Road to Movement

After the magic lantern were a variety of devices that ultimately helped us create animation today– we had the thaumatrope in the 1800s, which was a 2-sided disk decorated with two different images (one on each side) that was hung on a string.

When it spun, the images, of course, displayed movement.

The phenakistoscop, besides being difficult to pronounce, is an incredible animation device that gave the illusion of movement. Sort of like the early bowl found on Iran, the phenakistoscop incorporated a series of images drawn onto a disk. According to a course at North Caroline School of Sciences and Mathematics,

The phenakistoscope consisted of two discs mounted on the same axis.  The first disc had slots around the edge, and the second contained drawings of successive action, drawn around the disc in concentric circles.  Unlike Faraday’s Wheel, whose pair of discs spun in opposite directions, a phenakistoscope’s discs spin together in the same direction.  When viewed in a mirror through the first disc’s slots, the pictures on the second disc will appear to move.

The Kinetoscope and its Advances

The kinetoscope, created by Thomas Edison, based on the earlier patents made by Louis Le Prince, is, in our opinion, one of the coolest advances in animation.

It worked by “conveying a strip of perforated film bearing sequential images over a light source with a high-speed shutter.”

Our Favorite Examples of Early Animation

Edison and his company were able to create some “dramas,” like the one below, which features a man who overslept attempting to get ready to catch his train in time.

A collection of Edison’s early videos can be found on the Library of Congress’ website.

1895 Auguste and Louis Lumiere project their film, “Workers Leaving the

Lumiere Factory in Lyon-Montplaisir” which you can see above.