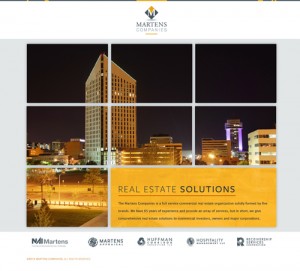 We’d like to congratulate Martens Companies on the launch of their new site!

When companies go through small re-organizations, it sometimes creates a little buzz. But in Martens’ case, they became NAI associated, which created a big buzz! The Martens Companies is a group of organizations under the Martens umbrella, and becoming NAI affiliated gave them a golden opportunity to reorganize their website, too.

So that’s exactly what we helped them do. With help from their marketing team, we created a new look for the company and its subsidiaries, and made access to each site much easier for users. Now you can get to all their affiliate sites from one landing page. It was a different kind of challenge for us, because it was a four-site launch rather than the single-launch we’re used to. It took lots of coordination and preparation to make sure everything tied together seamlessly – it was kind of like making dinner, and having all our dishes ready to eat at the same time!

Check them out at www.martenscos.com.